The 3rd Quarter in Review

In contrast to earlier in the year, equities were stuck in reverse for much of the 3rd quarter, with the MSCI ACWI (All Country World Index) down -5.1% by the middle of August. Stocks recovered, though, and the ACWI ultimately ended flat for the quarter. The catalysts for the August decline were largely the same issues that have been weighing on markets for the last two years: the US-China trade dispute, which continues to simmer but neither boil over nor cool down, and a manufacturing slowdown that investors fear may foreshadow a recession.

At the time, we thought those worries were overblown, and said that:

… we think the current decline is just another run-of-the-mill stock market correction, which we see on average once a year. We think this is the second leg of a 2-legged correction that began in May. If it follows the usual playbook, this leg should bottom close to current prices, or perhaps 2% to 3% lower. Uncomfortable, but far from a recession-induced bear market.

Shortly after we wrote the above, stocks regained their composure, recouping their losses by quarter end. Meanwhile, bonds eked out modest gains, as two Federal Reserve rate cuts fueled higher bond prices. KCS’ individual equity portfolios benefitted for the third quarter in a row from this environment, as our stock selection offset less robust gains in international companies. Our fixed income securities also performed well, aided by large gains in some of our convertible bond and preferred stock selections.

2019 as a whole has been strongly positive for both stocks and bonds. As of the day before Halloween, the MSCI ACWI is up an impressive +19.5% for the year, while the Barclays Global Bond Index has returned +6.4%. Why, in the face of so many concerns, do both equity and bond markets continue their upward march? It has often been said that “bull markets climb a wall of worry.” It seems counterintuitive, but the more stuff investors have to worry about, the better markets do. This is because these worries are often overblown, and reality turns out to be less bad than feared.

Over the past decade, investors have had plenty to worry about. In 2009 – 2010, it was massive home foreclosures. In 2011 – 2012, several countries in the EU (remember “PIIGS?”) were supposedly on the verge of default. 2013 brought us the US “fiscal cliff.” In 2014 and 2016, investors were focused on a China “hard landing,” and in 2017 we had quantitative tightening and the “taper tantrum.” Today it’s the trade war and a global manufacturing slowdown. As a rule, there has always been some specific “big fear” among investors. Yet so far, these risks have not amounted to much, and equity markets have continued to climb.

The tendency of markets to rise in the face of both real and imagined risks is partly why we advocate a long-term investment approach rather than attempting to time the markets. All too often, investors factor in “worst case” scenarios when they feel unsure about the future. Uncertainty breeds discomfort, which all too often leads investors to sell at low prices rather than hold on in the face of the unknown. KCS aims to take advantage of this investor tendency by putting discomfort aside and looking at such problems objectively, modeling the likely paths and evaluating whether the uncertainties translate into significant risk to our investments at current prices. As we noted earlier this year:

Financial markets, and the world in general, are always facing risks, some of which are obvious and some of which are not. It’s the hidden risks that pose the biggest threat to our wealth, as well-known hazards are quickly priced into markets. Remember, too, that the best times to invest are not when things seem safe but when chaos reigns. That is certainly true in the UK right now, as well as in Hong Kong and, some would say, the US. Hence, we think that now is not the time to become defensive. Rather, you want to reduce portfolio risk when everything seems bright and sunny (e.g., 2000). Now is not one of those times. [emphasis added]

Geopolitical risks are not uniquely different from other kinds of risks, though they have a different source (governments rather than companies or consumers). Brexit and the current US-China trade dispute fall into this bucket. These worries differ substantially from the financial risks that faced the global economy in 2007 – 2009, or from Federal Reserve tightening that precedes the majority of recessions. Other geopolitical risks that we are following now—and that are causing many investors to fret—include: US impeachment hearings, Hong Kong democracy protests, missile attacks on Saudi oil facilities and, most recently, the Turkish invasion of Kurdish-occupied Syria.

One thing that is different now compared with most of the past decade is the temperature of geopolitical risks. With all the potentially worrisome items we’ve listed above, it’s no wonder that investors are more on edge than usual. In addition, most of the geopolitical angst today is affecting developed nations rather than the emerging markets where geopolitical risk is a way of life.

The Global Economic Policy Uncertainty Index, shown below for the past 20 years, illustrates the growing influence of geopolitics on markets. You can see that in recent years, this indicator has reached two-decade highs. Like other types of uncertainties, geopolitical worries can cause companies to delay investments and trim inventory. We are seeing exactly that over the past year or so, with manufacturing especially hard hit as trade disputes have slowed the growth of international trade, most notably between the US and China. More than the tariffs themselves, however, it’s the uncertainty of what the future may hold that causes companies to be cautious. Reduction of uncertainty, even if it means that tariffs will continue at a known level for the foreseeable future, will enable businesses to plan for the future and increase their investments. 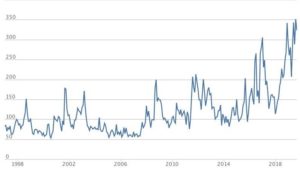 When investors price in worst-case scenarios, even a small piece of good news can make markets jump. One illustration of this can be seen in the UK equity and currency markets’ response to the October 10 announcement of an imminent Brexit deal and the vanishing likelihood of a no-deal Brexit. From the announcement through Oct. 30, the UK country ETF added +8.0%, with some individual equities, such as Lloyds Bank (one of our model holdings) up +20.9%. Realizing that the worst case is now unlikely, investors piled in to buy.

We believe that British Prime Minister Boris Johnson’s newfound willingness to compromise is a positive for both the economy and the markets. As we write, the EU has again granted the UK a 3-month extension on Brexit, with the proviso that it could occur earlier if a deal is struck. New elections in December could change this calculus, as could a second Brexit referendum, but the specter of the UK chaotically crashing out of the EU now seems remote. The signing of a Brexit deal (or alternatively, a new referendum that rejects Brexit) would lift a huge weight from the European economy and allow their equity markets to continue to recover toward higher valuations.

On this side of the Pond, October 11 saw a tentative trade truce between the US and China that included a very limited deal (with nearly identical provisions to tentative trade agreements made earlier this year). More important than the deal itself, however, is a halt to near-term escalations of the trade conflict. Even this small bit of progress was enough to lift the S&P 500 index by +3.7% from Oct. 11 through Oct. 30.

Either a signed US-China trade deal or a Brexit conclusion could move global stock markets several percentage points higher, as worst-case scenarios are replaced by more positive outcomes. All sides in the various negotiations surely know this by now, and both problems are completely manmade and solvable with the right motivations. Hopefully, the recent positive market reactions to minor victories have encouraged the parties involved to reach amenable outcomes.

Our portfolios are positioned to take advantage of more permanent resolutions to both the US-China trade dispute and to Brexit. In equities, we are slightly overweight non-US stocks, as we think these are the areas most discounted by the geopolitical overhang. In fixed income, we remain tilted towards shorter-duration holdings, as we think constructive deals on either of these issues could send interest rates meaningfully higher. Similarly, we are also starting to tilt more towards value stocks, which are pricing in worst-case scenarios to a greater degree than growth stocks.

During a period of heightened geopolitical risks, including a US President facing impeachment, investors are understandably nervous. But we believe that current asset prices already take this into account—and more—meaning that an upside surprise seems more likely to us than a large decline (with all the usual caveats about predicting the future). Similarly, we think that a recession in the US is still at least a year away, while an acceleration of economic growth overseas could take place once Brexit and the US-China trade dispute are no longer constant worries.

Today seems different from past eras, and of course it is. But human nature never changes, and investors will continue to react with their emotions in ways that can harm their investment returns. At KCS, we continue to acknowledge those emotions, including our own, and manage our portfolios in ways that put them aside or even take advantage of investor irrationality. So far, this has worked well for us, and we hope to continue our successes going forward.

KCS Wealth Advisory is a registered investment adviser. Our services include discretionary management of individual and institutional investment accounts, along with personalized financial, estate and tax planning services. Opinions expressed are subject to change without notice and are not intended as investment advice or to predict future performance. The economic forecasts set forth in the presentation may not develop as predicted and there can be no guarantee that strategies promoted will be successful. Past performance does not guarantee future results. Investing involves risk, including loss of principal. Consult your financial professional before making any investment decision. Other methods may produce different results, and the results for different periods may vary depending upon market conditions and portfolio composition. This email does not represent an offer to buy or sell securities.

Investment advisory services offered through KCS Wealth Advisory, an SEC Registered Investment Adviser. Clearing, custody services and other brokerage services provided to clients of KCS Wealth Advisory are offered by Fidelity Brokerage Services LLC, Member NYSE/SIPC. Fidelity and KCS Wealth Advisory are unaffiliated entities. Electronic communications are not necessarily confidential and may not be delivered or received reliably.  Therefore, do not send orders to buy or sell securities or other instructions related to your accounts via e-mail.  The material contained herein is confidential and intended for the addressed recipient.  If you are not the intended recipient for this message, any review, dissemination, distribution or duplication of this email is strictly prohibited.  Please contact the sender immediately if you have received this message in error.