The Second Quarter in Review

This year’s investment performance stands in stark contrast to the situation last December, when over 90% of asset classes were finishing 2018 in the red. In contrast, as of today nearly every asset class is in positive territory for the year, and the gains at this halfway mark are already equal to or greater than the losses experienced last year. Global equities have led the pack, with the MSCI All Country World index posting returns of +3.6% in the second quarter and +16.2% through the first half of 2019. Global bonds have also staged a notable comeback, with the Barclays Global Aggregate bond index returning +3.3% and +5.6% over these respective periods.

Against this backdrop, KCS portfolios have performed quite well this year. Our equity performance was aided by strong stock selection, offset in part by our greater international weighting. At the same time, our bond portfolios are also doing well relative to our benchmark, aided by a rally in non-government bonds, but offset in part by our tilt towards shorter-term debt holdings, which did not appreciate as much as longer maturity debt did during this period of sharply falling interest rates.

In the thick of the December market chaos last year, we noted the following:

“At this point, there are only whispers of the “R” word, and virtually all economists and most investors—including ourselves—do not see a recession on the near-term horizon. What we do see are three primary concerns that are weighing on the markets. We don’t believe that these three issues, either individually or collectively, will weigh heavily enough to crush the bull market that began 9 years ago. Rather, we think the decline that started in October is a textbook correction that will give way to new highs in the indexes next year. In addition, we think the correction is just about over and a sustainable rebound is nigh.” [emphasis added]

In retrospect, both our impression and our timing were spot on, as later that month the markets initiated a persistent rally, even though none of the three “concerns” we identified (tariffs, Brexit, and an inverted yield curve) had been resolved. Markets have instead “climbed a wall of worry” as investors started to realize that the bad news was more than priced in. Those who resisted the urge to sell and stomached last year’s volatility have been rewarded with new all-time highs in 2019.

As of this writing, our current business cycle holds the record for the longest economic expansion in US history. At over 120 months, fears that this expansion is getting long in the tooth are not unreasonable. However, as we’ve pointed out in the past, length alone is an incomplete descriptor of an economic cycle, as the cumulative GDP growth of this expansion remains paltry in comparison to past eras of economic expansion. Thus, we are sticking to our base case that relatively slower growth will continue for a while longer. 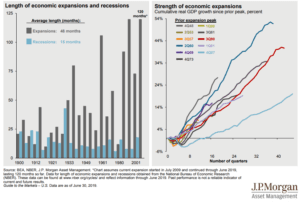 Although the current expansion is historically long (last bar on the left side), it has been unusually weak (light blue line on the right side).

That said, we remain alert to warning signs that the expansion is nearing its end. Of the key indicators that we follow, so far only one has flashed yellow: the yield curve. We have mentioned the “inverted” yield curve before, in which shorter-term interest rates are higher than some longer-term rates. As of today, the 3-month Treasury bill rate has been above the 10-year note for about 8 weeks. Although this behavior has preceded recessions in the past, the lead time is typically 18 months and its predictive accuracy is not 100%. In addition, only a few yield curves outside the US are inverted, with the majority remaining upward sloping (longer rates higher than shorter ones). Perhaps most importantly, the bond market in general has been behaving somewhat strangely since the end of the great recession in 2009. While there are other factors involved (such as persistent investor fear), most of the blame can be placed on the unusual behavior of central banks over the past decade, particularly in Europe and Japan. This has caused interest rates around the world to drift lower than almost anyone thought possible.

How Low Can We Go?

It’s fairly telling that the acronym “ZIRP” (which stands for “zero interest rate policies”) has largely been replaced in the economic lexicon by “NIRP” to convey the new, negative nature to interest rate policies. Negative interest rates have become the flavor du jour, moving from an economic thought experiment just a few years ago to real life. Take a moment to digest the list below. 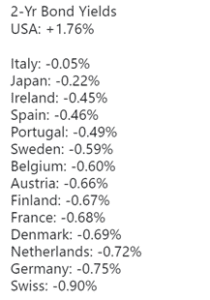 Bond investors, across a wide array of countries and currencies, must now accept small guaranteed losses from government bonds over two-year periods. The losses aren’t trivial, with investors in Swiss government bonds seemingly content to receive only 98 cents back at the end of two years for every dollar they invest. And not all these bonds are riskless. For example, Italian government bonds were priced to yield nearly 8% in 2011. Three of these countries even had their own acronym to convey their collective riskiness (“PIGS” – Portugal, Ireland, Greece & Spain). And yet today, investors pay to lend them money!

Furthermore, this strange situation is not confined only to two-year bonds. The Netherlands, Germany, France, Japan and Switzerland all count themselves among the list of blessed countries that can borrow money for a full ten years and be paid to do it. As of today, the global value of below-zero interest rate debt is over $13.5 trillion, or an estimated 4% of the world’s wealth. Not surprisingly, these countries are taking advantage of the situation, with perhaps the most notable example being Austria’s recent issuance of a 100-year note at a whopping interest rate of 1.2%. Yes, the rate is positive, but would you lock your money up for a century at 1%? We certainly would not! 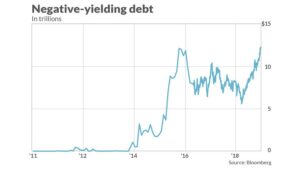 Who is buying these assets? When a friend recently asked a European bond manager why they were investing in 10-year German bunds at a negative -0.40% interest rate, they said, “Because the guy who bought it at -0.20% is sitting on gains this year.” Hoping to make money on bonds solely because interest rates might become more negative is not a recipe for long-term investment success.

This bizarre state of affairs, which the world has never seen before, must eventually come to an end. When this will happen, and how disruptive will be the inevitable normalization of interest rates, is impossible to predict. Unfortunately for us as US investors, it’s possible that negative interest rates elsewhere will make their impact felt over here, pushing our own interest rates even lower than their current near-record lows (though negative rates here are less likely). Though our base case is that the trend toward negative rates is more likely to soon reverse than to deepen, we are keeping a close eye on potential spillover effects from overseas.

There is a budding confidence in the markets that politicians and central bankers will do whatever it takes to protect stock markets and investor returns, even if that means pushing rates lower than the economy requires. Count us skeptical. With the yield curve already inverted, the economies of Europe, Japan and China slowing, and interest rates in much of the world lower than ever before in history, we have continued to make small shifts in our portfolio to hedge against rising interest rates as well as weakening credit among the highly indebted.

Within equities, we are gradually shifting our weighting more towards value stocks (as distinguished from growth stocks), which are now as hated as they were during the tech bubble of the late 1990s (Many will remember what eventually happened to those “perma-growth” stocks back then—the NASDAQ-100 index, for example, ultimately fell -78% from its peak.) Growth stocks have been stars for the past decade, outperforming value stocks in 7 out of 10 years since 2008. This is the longest stretch of outperformance by growth stocks in history, including the tech bubble of 1995 to 2000. We think it’s about time for value to shine, although the exact timing of this shift is impossible to predict. We do agree with John Rekenthaler, vice president for research at Morningstar, when he was quoted in the New York Times saying, “If I had to bet, I’d bet on value stocks for the next 10 years.”

While it can be frustrating to be early (as we were with non-US stocks in 2015, only to be vindicated in 2016 and 2017), patience is a virtue in investing. For example, investors in Warren Buffett’s Berkshire Hathaway (a classic value stock) in 1999 were probably watching with envy as the NASDAQ-100 index doubled and Berkshire stock slumped. But in March 2000, the two switched places and Berkshire nearly doubled over the next 4 years while the NASDAQ-100 tumbled.

Meanwhile, within our bond portfolios, we are keeping our duration (interest rate sensitivity) low by emphasizing shorter maturities (as mentioned above) and avoiding anything carrying a zero or negative yield. Despite the relative unattractiveness of the bond market as a whole, we are still finding value in emerging market bonds, investment-grade corporate bonds and some preferred stocks (which behave like bonds). If interest rates remain near where they are or move higher, we believe that this positioning would cause our bond portfolios to outperform materially.

A rear-view mirror is not a useful tool for investors, yet many employ it with abandon. Assuming that what happened in the past—for example, falling interest rates, outperformance by both US and growth stocks—will continue into the future is naïve at best and dangerous to your wealth at worst. Aggressive and cautious investors alike need to make assumptions about the future and position themselves to take best advantage of the environment they envision. At the same time, they need to take precautions in case an unexpected future occurs. At KCS, we do both on a regular basis, investing for tomorrow rather than yesterday, yet hedging our bets in case parts of our vision turn out to be incorrect—and all the while updating our models as new information comes in.

In sum, we are cautiously optimistic about the future. While there are clear risks out there, they are well known and mostly baked into asset prices. The late stages of an expansion can be tricky to navigate because we know that a recession will follow at some unknown future date, pulling asset prices down significantly, though temporarily. At the same time, some of the best stock market gains can occur during the final year or two of an expansion. At KCS, we’re doing our best to take advantage of likely late-cycle gains while being vigilant for the eventual end of the current cycle, which we don’t think will occur until after the next election.

Opinions expressed are subject to change without notice and are not intended as investment advice or to predict future performance. The economic forecasts set forth in the presentation may not develop as predicted and there can be no guarantee that strategies promoted will be successful. Past performance does not guarantee future results. Investing involves risk, including loss of principal. Consult your financial professional before making any investment decision. Other methods may produce different results, and the results for different periods may vary depending upon market conditions and portfolio composition. This does not represent an offer to buy or sell securities.