Wednesday night (US time), Russia bombarded a number of Ukrainian cities and Russian troops swarmed into Ukraine from both Russia and Belarus. It now appears that Vladimir Putin intends to conquer Ukraine and replace their democratically elected government with one that is friendly to Russia and antagonistic to the West. One can only speculate as to why Putin is doing this, given the immense cost in lives, money and his standing on the world stage, yet Russia’s troops now appear poised to march into Kyiv even in the face of “severe” global sanctions.

What Will Be the Economic Consequences?

There are some meaningful near-term risks to the global economy, partly as a result of Western sanctions and partly from Russia’s potential response. Russia is a major oil producer and supplies about a third of Europe’s natural gas. The potential for supply disruption is the reason the prices of these commodities have risen so much recently, adding to already high inflation. But Russia is also a huge producer of aluminum, used in everything from soda cans to jet airplanes, as well as titanium, uranium and nickel. Supply disruption of these commodities is also possible and could further exacerbate both inflation and supply chain challenges.

Given the West so far seems unwilling to impose truly draconian sanctions on Russia (probably for fear of their impact on other countries), major supply disruptions seem unlikely. The behavior of oil prices yesterday indicates that the markets agree with us—while the benchmark oil price shot up to nearly $100/barrel early on, it ended yesterday’s trading at $93, up less than $1 from the previous day. (Natural gas rose only 1.3% yesterday and the price remains well below its late-February peak.) On the plus side, however, recent market turmoil may cause central banks to increase interest rates a bit more slowly than they had intended, though we wouldn’t bank on this.

How Does the Market Typically React to Geopolitical Crises?

Although wars and other major geopolitical events typically result in market declines, the impact is rarely lasting. One can look at the reaction of the Dow Jones Industrial Average to a long list of geopolitical shocks and the index’s level 6 months later here: https://www.amundi.com/usinvestors/Resources/Classic-Concepts/Crisis-Events-and-the-US-Stock-Market. On average, the Dow fell –5.7% during the crisis, but was +10.9% higher 6 months later. Keep that in mind when interpreting current market action.

Will Another Shoe Drop?

There are other geopolitical risks to keep in mind, though we see these as very low probability. One is that Putin doesn’t stop with Ukraine and invades another country. If this does occur, it would probably be several years from now and would likely be a non-NATO country such as Moldova. The second is that Putin’s success might embolden China to directly threaten Taiwan. We think that despite China’s bellicose rhetoric, they realize that military action in Taiwan would be extremely costly and almost certainly position them head-to-head against the US military. But we are watching closely for signs that either of these could become more likely.

The world has survived many military conflicts and other geopolitical crises. While stocks typically fall initially, in the vast majority of cases they are higher 6 months later, often by double digits. We see no reason to believe that market reaction to Russia’s invasion of Ukraine will be any different.

The Market Correction—Are We Done Yet?

Lastly, stock market moves since the beginning of 2022 imply that we are far nearer to the end of the current decline than the beginning. Since early January, we have been in a correction (a decline of 10% to 20%) that may well have bottomed yesterday. As with the majority of previous market corrections, there have been two bottoms so far this year—the first on Jan. 24 and the second exactly one month later, on Feb. 24 (see the graph of the S&P 500 below). Each of these bottoms had the character of a “selling climax” in which stocks plunge early but ultimately end higher for the day. This pattern of price moves implies that the worst is already behind us. 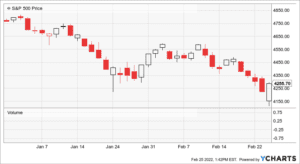 Very occasionally, a stock market correction has a triple bottom, so we can’t rule that out. And we obviously can’t rule out something else completely unexpected taking stocks even lower. But if the stock market continues to behave as it has for the last 100+ years, the odds favor a higher market later this year. Both history and many years of investing experience have also shown that staying the course is inevitably more profitable than attempting to time the market. “Profits come to those who wait.”

Yours truly,
The KCS Investment Department

Investment advisory services offered through KCS Wealth Advisory, an SEC Registered Investment Adviser. Clearing, custody services and other brokerage services provided to clients of KCS Wealth Advisory are offered by Pershing LLC, Member NYSE/SIPC. Fidelity and KCS Wealth Advisory are unaffiliated entities.
Electronic communications are not necessarily confidential and may not be delivered or received reliably. Therefore, do not send orders to buy or sell securities or other instructions related to your accounts via e-mail. The material contained herein is confidential and intended for the addressed recipient. If you are not the intended recipient for this message, any review, dissemination, distribution or duplication of this email is strictly prohibited. Please contact the sender immediately if you have received this message in error.