The First Quarter in Review:

In stark contrast to the final months of 2018, markets rebounded in spectacular fashion during the first quarter of 2019, with equities recouping nearly all of their losses from the fourth quarter of last year. This time, gains were nearly universal—a welcome change from 2018, during which 90% of asset classes finished the year in the red. Stocks led the way, with the global MSCI All Country World Index posting a robust +12.2% rise. Bonds also did well, returning 2.2% globally. The net result for a balanced 60% stock/40% bond portfolio invested in the indexes was a return of +8.2% in Q1-2019.

KCS’ portfolios did well relative to the indexes during this period, with our equity portfolios aided by our selection of individual stocks as well as our sector weightings. Within fixed income, our exposure to high yield bonds, preferred stocks and emerging market debt contributed strongly to our performance. Our alternatives, which include MLPs and convertible bonds, also rose handsomely. This combination of strong relative performance within each asset class resulted in very satisfying overall returns for KCS portfolios relative to the indexes.

We mentioned last quarter that markets rarely fall two years in a row. The robust returns seen so far this year certainly suggest that 2019 will be solidly positive and a welcome change from 2018. Asset valuations, at least among equities, are not overly rich, but they are no longer the screaming bargains they were in late December. In the absence of a recession (which we see as low probability over the next year) or a major geopolitical event, we think that any declines this year should be modest, particularly in contrast to last year.

Although a recession-induced bear market appears unlikely, the global economy is hardly going gangbusters. While US GDP recently surprised to the upside, some components that were major contributors to Q1 GDP growth, such as inventory buildup and net exports, provided only a temporary boost. Overseas, growth is decidedly sluggish, particularly in Europe and Japan, although China’s stimulus measures finally appear to be taking hold. The key question at this juncture is whether economic growth continues to be anemic and eventually fades to recession sometime in the next year or two, or whether growth re-accelerates later in 2019. The latter is obviously the more beneficial outcome for investors.

While we are not raging bulls, the KCS investment team is leaning toward the latter, more positive view, based mainly on the following five reasons: First, with the US Federal Reserve on hold and other central banks easing, global monetary policy remains very accommodative (i.e., loose). Second, China’s economic indicators have recently picked up, despite the continuation of US tariffs. Third, the trade disputes between the US and its trading partners are cooling off rather than heating up. (This week’s announcement by the White House did add a wrinkle to the US-China trade dispute with a threat to increase tariffs from 10% to 25% on the goods already subject to them. Even if the higher tariffs do take effect, we believe both sides have come too far to scrap the trade agreement they have worked many months to craft. We still expect a deal, though it may not come as soon as hoped.) Fourth, with Brexit now delayed to Halloween, popular opinion in the UK continues to move against the hardliners, suggesting that any Brexit will be very soft or may not happen at all. Fifth, the V-shaped recovery in the stock market since December is classic correction behavior, which is almost always followed by continued economic growth and positive stock market returns.

We are obviously late in the current economic cycle, which very soon will have the distinction of being the longest ever in the US. But as we have stated in previous newsletters, cumulative GDP growth over the past 10 years hasn’t even come close to setting any records. Meanwhile, overseas, we have had at least 2 mild recessions since 2009, meaning that the current expansion outside the US is only a few years old in many countries, including most of Europe, South America, India and Japan. Perhaps most significantly, some of the best market gains in a cycle occur during its final year or two, meaning that a continued stock market “melt-up” is not out of the question. The recent brief inversion of the yield curve might indicate some trouble down the road—in 18 months or so—or could even be a false signal. But that’s an issue for 2020, not this year.

Our “cautious optimism” is reflected in our positioning. We have been taking advantage of strong equity markets to trim positions that that have done well recently and now seem less attractive. In fixed income we have been taking advantage of low risk spreads and a relatively flat yield curve to reduce credit and interest rate risk. For example, we have diversified our municipal bond holdings in taxable accounts by shifting some of this allocation into treasuries and high-quality corporates. We have also increased the credit quality within several of our bond buckets, including US corporates and bank debt, and eliminated most of our mortgage-backed bond exposures in favor of shorter-term corporates and Treasuries. Within alternatives, where taxable gains have not been prohibitive, we completely sold out of our MLP positions after this sector rose more than +18% in the first quarter of this year.

KCS portfolios remain globally diversified—Why don’t we invest mainly in the US?

Bridgewater Associates recently put together a paper with the title, “Geographic diversification can be a lifesaver, but most portfolios are highly geographically concentrated.” We knew that we would agree with their positioning when they stated early on that “the best way we know to earn consistent returns and preserve wealth is to build portfolios that are as resilient as possible to the range of ways the world could unfold.” We agree and make a point of fighting our biases, and the status quo, in an effort to achieve the best possible long-term risk and reward outcomes for our clients. And perhaps there is no bigger bias in investor portfolios today than the one behavioral economists call “home market bias”. It’s remarkably consistent, across geographies as large as the US to as small as Australia (see below). Should Australians really be investing 67% of their assets at home when that economy makes up less than 2% of global GDP? Or what about Canadians, who invest 59% of their investment assets in a market that closely tracks the energy sector? Or the Japanese, who have invested 55% of their wealth in a country whose stocks are up just 1.1% since 1994? We think investors too rarely appreciate the benefits that come from increasing their geographic diversification. 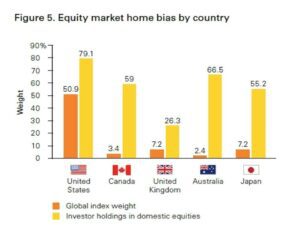 Why diversify across the world? Because throughout history, almost every country has had a period in their financial markets that resulted in a severe capital loss that required a decade or more to recover. In fact, six countries on the list below are still recovering from their most severe drawdowns. Note that these are not problems faced only by small, unstable economies. The US, UK, Germany, Japan and Russia all faced at least one loss greater than 70% since 1900, in each case while starting from a period when they were among the top economies of the world. And in each case, a globally diversified portfolio helped mitigate the loss and allowed for faster portfolio recovery. 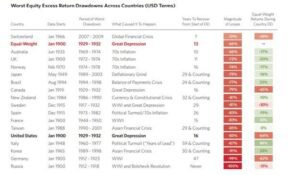 We can see the benefits of diversification in another way by looking at the graphs showing the maximum drawdowns (decline from the peak) of both stocks (the left-hand chart) and bonds (the right-hand chart) from 1950 to 2010. These charts show the amount of decline from the peak for individual countries in light gray, the US in dark grey, and a diversified (equally-weighted) basket of countries in red. In in every period, the drawdowns for the diversified portfolio (in red) are considerably smaller than either of the gray lines. Note below that bonds are also not immune to large losses, with one country experiencing a 60% loss in the early 1980s.

As a US investor, you might ask, “how much return do I sacrifice by reducing risk through this geographic diversification?” In the long-run, the answer is “none.” Since 1950, US stocks (in dark grey) have outperformed the average of those in foreign countries by about 1% per year, with all that outperformance having occurred since 2009. However, the returns from an equal-weighted portfolio (in red) have still been better than the US, as rebalancing into countries that have recently underperformed has typically resulted in larger subsequent gains as their economies and stock markets rebounded. This point is often missed, and is true for bonds as well as stocks.

In sum, the time seems particularly right for geographic diversification. After a decade during which the US markedly outperformed most other countries’ stock markets, it’s about time for “reversion to the mean,” suggesting that the US could underperform over the next decade. 2017 was a preview of this, as even though the US market did well, foreign markets performed even better. As we strive to continue to build portfolios that are as resilient as possible, we see our diversification as a major contributor to our long-term risk-adjusted performance.